As you all know I’ve been slowly making my rounds through the Parisian yoga scene, trying classes here and there to get a taste of what it’s like to practice in this city. My ventures these past weeks have been two great studios, Rasa Yoga Rive Gauche and Be Yoga.
Rasa is simply a beautiful space. It’s located near Metro Saint Michel, on the left bank in the Latin Quarter. This section of Paris is home to the Sorbonne and has been the hub of student culture in Paris for centuries. The studio, like many in Paris, is nestled in a courtyard, between buildings. I really like this about Paris…the street view is never the whole story…there are gardens and calm alcoves located just between the exterior facade. 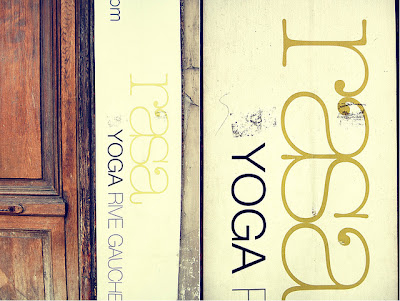 Once inside Rasa is bright, white and calming. There’s a large retail and reception section, with chairs and benches. The main studio has windows right into the lobby area, so you can actually see what’s going on in the class. I stopped by for a late evening led Ashtanga class with Charley, an American teacher, who also runs their morning Mysore program.
The class was quite full, but not overcrowded, and I enjoyed the energy of the other students. Charley keeps a great pace in his class…pretty fast, but not rushed at all. In fact, the class is scheduled for an hour and 45 minutes…and we used the time! He challenged us with specific details on refining our jump backs and throughs, something that weaves his strong teaching style together.
The next week I got a message from my teacher Lara telling me that her dear friendDorion was in Paris teaching. I was excited to make it over to Be Yoga for her evening led class. Be is really adorable. It’s located in a cobble stone alley off the main road, and is covered in a perfect little arch of trees. The front of the studio is painted a jovial green color and it was the perfect, warm, welcoming place to end up on a rainy Parisian night!

Dorion is just about one of the loveliest ladies I’ve ever taken class with. I was happy to catch up with a friend of my teacher! Her class was smart and detail oriented. We took the Ashtanga standing series and some of the primary seated series and slowed it down a bit, to focus on the ease of each posture. I was really happy to see the joy, lightness and care she takes in teaching.
Last week we moved apartments, from the super trendy Oberkampf area in the 11th district to the Gambetta metro stop in the 20th district. It’s a little further out of the center of the city, but still super accessible. I love our new apartment, which we’re renting from the acting coach from Michael’s production. It’s got a great energy partly because it’s been arranged using the principles of Feng Shui, something I’ve always been interested in, but never taken the time to implement fully. I challenged myself to take home practice this entire past week, and have really enjoyed it in this space. This week, however, I think I’ll venture back out to practice in some more studios around Paris!